burn it all down

If you’ve been following me for a while, you probably already know that I began my revolutionary journey earlier this year.

And let’s make one thing clear: it wasn’t a walk in the park.

But, in many ways, I also had it relatively easy.

I had the luxury of not being the person anyone was going to step towards or look for, so it wasn’t as hard for me to start my journey as it was for so many others.

And I’m so in awe of all the brave WFOC entrepreneurs out there who took the leap despite so many things like having a predominantly white audience, serving white clientele, or having to navigate through years of poverty consciousness. 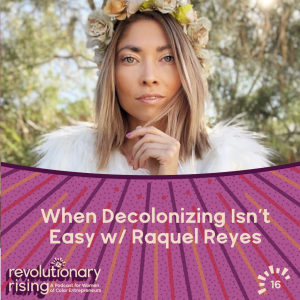 Which is why today’s podcast guest, Raquel Reyes, is someone I respect and admire.

And I’m so pumped to be interviewing someone so near and dear to my heart.

First thing you should know about Raquel is that she’s the bomb-dot-com. Not only is she a fantastic astrologer, she’s also MY astrologer who’s really helped me make sense of 2020 and I’m so grateful to have her in my life.

Second thing you should know about her is that she’s the definition of a revolutionary human. She isn’t afraid to say or do the damn thing in service of her own values and collective liberation.

And she isn’t afraid to burn it all down.

That meant that when she did begin her decolonization journey in 2018, she had to deal with plenty of white people in her audience who were extremely vocal about not wanting her to talk about anything but astrology.

Listen in on today’s episode to learn about Raquel’s tough journey in decolonization, why the word ‘snap’ is so elemental to it, how her past and ancestry informs everything she does and so much more!

And if you’re an astrology nerd like I am, there’s plenty of talk about rising signs!

Until next time precious,

The best part about building a Revolutionary life is knowing that your fam’s got your back. Join the Revolutionary Changemakers of Color Facebook group for women and femmes of color who want to create change, and do it THEIR way.