When you listen to today’s episode of the Revolutionary Rising podcast, you’re gonna hear me sound all put together, articulate, and confident, feeling perfectly okay with exposing my vulnerabilities to the community…

But that’s all thanks to my editing team.

Truth is, I’d been avoiding recording this episode for weeks.

I didn’t know how to start the conversation around my spirituality. I was worried about coming off too strong and putting people off. And even when I finally mustered up the courage to hit ‘record’, I stumbled a dozen times along the way, I struggled to find the right words and had to keep stopping in between (and taking several breathers).

Because I still don’t feel 100% comfortable talking about my spirituality and my psychic gifts.

And it’s crazy because my spirituality impacts my life and my business in such central ways, and yet, I struggle to tell people about it.

There are a few reasons why.

And I have nothing against that. In fact, it’s where I started my spiritual journey too. With a white woman who convinced the then uber cool, magic-is-BS Gieselle to a reiki session. And with her help, I learned that I too had gifts – that I too was a medium and a psychic.

But I quickly realized that I was often the only black (and the youngest) person in the room.

Now unlike most white (and some black) folks, I wasn’t the kind of girl who’d sit in front of an altar, do readings, perform rituals. I didn’t roll with that stuff, it just wasn’t my style.

And so I always drew back from claiming my spiritual identity. I constantly felt like I wasn’t enough because I wasn’t doing all those things.

I thought, how could my version of spirituality be right when it looks like no one else’s out there?

And it took me a very long time to realize that my spirituality was never gonna look like white spirituality because… I wasn’t fucking white.

And that realization was my first step into decolonization.

Now I’m not here to point fingers at anybody. It’s none of my business and your girl doesn’t go putting her nose in places it doesn’t belong.

But I do want you to take away a few things from my story. 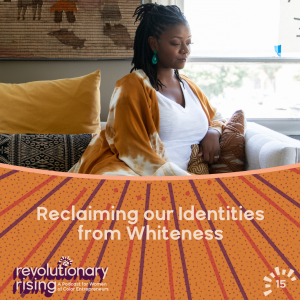 I want you to know that there is no right or wrong way to be spiritual.

And there’s sure as hell no reason why you should hide away parts of yourself just because they don’t look the same as everyone else’s.

My spirituality and my intuition is at the core of every single decision I make in life. It impacts how I do business, how I help my clients, how I maintain my relationships, and yet it took me every last ounce of courage to get here and record this podcast for you today.

If today’s episode makes you feel like you’re ready to own those parts of you that you’ve been brushing under the carpet, join me on Revolutionary Rising, the group coaching program that has changed the lives of countless WFOC entrepreneurs.

We’re accepting applications until December 17th. But if you want in on a live private training session I’m hosting on December 10th, make sure you apply before December 9th!

The best part about building a Revolutionary life is knowing that your fam’s got your back. Join the Revolutionary Changemakers of Color Facebook group for women and femmes of color who want to create change, and do it THEIR way.